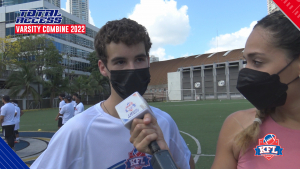 Football training camps have long been known to help athletes of all ages improve their athletic ability and performance.  More than that, though, stateside clinics can also be very helpful to youth athletes who want to get their talents noticed by US high schools and colleges as part of their effort to pursue a good education while also taking their game to the next level.

This is the case for José Ignacio Arango of the Brader Raiders who recently returned from a top stateside training academy where he ‘rubbed elbows’ with elite coaches and players as part of his effort to learn from the best while also keeping his eyes set on football at the collegiate level.

“IMG is one of the most prestigious academies in sports with 60 percent of its graduates attending Division 1 colleges”, Arango explained to American Football Films during an exclusive interview.  “It is where the players that will go on to the NFL train before the combine” he added.

Known as “Tumba Tumba” for his consistently aggressive play on the gridiron as well as his high academic achievement -- 4.75 GPA out of a possible 5.0 -- Arango was awarded ‘Athlete of the Year’ by local television station Cable Onda Sports following his stellar 2012 season during which he made almost 40 tackles playing middle linebacker.

In the same year Arango was also named his team's MVP and the Kiwanis Football League’s (KFL) MVP for defense.  The previous year Arango was named team defensive player in 2011 and had the most tackles among any rookie in 2010.  He was selected two times to represent Panamá on its coveted all-star team.

“Every year I have different goals” Arango explained.   “Maybe a school goal or with my family or something else.  But, I assure you, that two or three of my goals each year are related to football” he said.  “Is the best sport I play, I like it so much.  It is my true passion.”

IMG is a top US academy in Bradenton, Florida.

Led by Director and noted quarterback guru, Chris Weinke, a former NFL quarterback, Heisman Trophy winner and member of the Florida State Athletic Hall of Fame, IMG Academy is a fully accredited Pre-K to 12th grade school that also offers instruction for every position of American Football by NFL players and coaches.

“I got to meet players like Manti T’eo [San Diego Chargers], Gino Smith [currently unsigned], and Matt Barkley [Philadelphia Eagles]” Arango stated.  And, the year before, he said, “I had the opportunity to meet Russell Wilson [Seattle Seahawks] and Ryan Tannehill [Miami Dolphins] too.”

The International Federation of American Football (IFAF) World Team Development Camp hosts more than 75 aspiring high school players from 19 different countries including: Japan; Brazil; Denmark; Costa Rica; France; and Australia. The camp is held to help identify members of the World Team, a collection of the top international players aged 19 and younger who will compete against USA Football’s Under-19 National Team.

“I got the opportunity to train with the high school team, as well as train myself with the coaches in the mornings” Arango commented.  “We lifted weights every morning at 5 o’clock and we had practice in the afternoon.

I learned a lot about the defensive systems and pass coverage’s. But I also learned what it feels to be in environment where football and studies are the most important thing” he said.  “Weight lifting also helped me in muscular growth and power. I felt as I was part of the team and I got along well with the former players.”

Arango started in football at 7 and knew early that it would play a major role in his life.

“I started playing football in a flag league which was the only program around for kids at that time which consisted of four teams with kids from all schools” he explained.

“My first time hitting, it was against a bigger kid and I knocked him up several times, and from there came my knick name Tumba-Tumba” he said.  “Since day one, I knew I was going to play football for the rest of my life.”

“I decided with my parents that I want to play football in the collegiate level, but for me academics come ahead of football” he explained.  “I plan on studying industrial engineering so I will probably apply to some of the best engineering schools in the country.

“My recruiting process already started” he commented.  “I have my NCSA profile, coaches are interested in my playing at IMG, and my exposure is being continued as I play my junior and senior year [here in Panama].   I plan on attending football camps at universities where coaches are able to see me.”

Arango has been preparing himself for college since his team’s championship loss against the Fighting Owls last year.  “About two weeks later, I decided to hit the gym almost every day,” he explained.  “And, that’s what I’ve been doing, along with IMG and working with my personal trainer Roland Carter Jr.  I’ve been training to be, bigger, faster and stronger.

All players of the KFL must meet specific weight requirements that are based on age.  For some athletes, especially older boys within a respective youth category, maintaining weight and meeting eligibility requirements may not be so easy.

“Last year I had to weigh 150 pounds which was maybe one of the toughest tasks I have ever been through” Arango said.  “Hard work, motivation and determination paid off when I successfully managed my weight giving me the opportunity to have a successful season resulting in me being recognized for two awards” he explained.  “I felt that all that sacrifice was not for granted and I grew as a football player.”

While there have been many coaches and athletes who have developed Arango over the years, there is one person in particular to whom he is most grateful.  “My dad is the core and main reason I am good at this sport and I like it, Arango explained.  “I remember the time when I was 8 and we went to play a better team in Philadelphia” he continued.  “I was afraid” he said.  “But, my father encouraged me to have courage and ever since then he has built my character and has been my biggest supporter.”

“Nunca pares de mover las piernas” is something that I remember my father saying to me in those early years which is something I will always remember for the rest of my life” Arango said.  “I am 100 percent sure that without my dad I wouldn’t be where I am in football right now.”

And, Arango has ‘never stopped moving his legs’.

“I will play for the Brader Raiders as we start our first Varsity Team” he explained.  “My plan is to get my highlight tape from this year and start sending it to football coaches at IMG who have contacts with coaches from all around the USA” he said.

“Andre is the best” Arango said.  “He has helped me a lot in the recruiting process,” he added.  “A good highlight video is vital for recruiting and he has made two great ones.  I’m really grateful to him and what he has done to help me.  I really like what he is doing about football in Panamá and I hope he continues.”